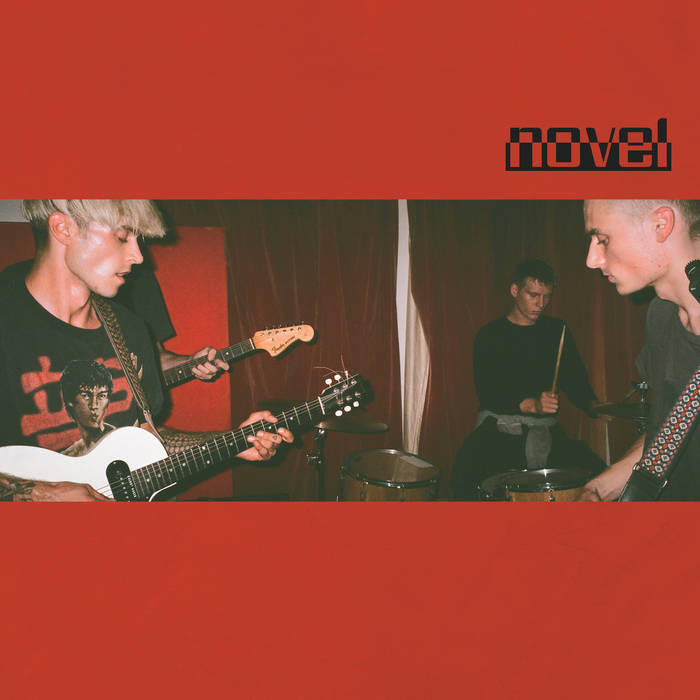 katkoenig Love that jangly geetar Favorite track: TO WHOM IT MAY CONCERN.

bamdumtss It's just so damn catchy! I haven't had an album that is as replayable as this one. Favorite track: SIGN ON THE LINE.

j a y definitely a band to look out for in 2020 and on Favorite track: SIGN ON THE LINE.

dazedinpublic Omg this band is awesome !
Really like this EP ive been listen it in repeat for like three week. Favorite track: WILL TO POWER.

N0V3L occupies a sonic landscape that recalls spring-loaded post-punk dissonance, new-wave’s downcast dance anthems, and skronking political funk. NOVEL, their eight-track debut EP, is a fluorescent, freshly-scorched declaration of intent, a martial, brutalist slab of nimble melodics and group-yelped anti-capitalist mantras: “Time is a resource/To use and to treasure!” they cry on opener, “To Whom It May Concern.” From the numerics in their name to their black/white/red aesthetic scheme, N0V3L is a carefully-calculated machine.

Frigid, wiry guitars scramble and sprint in syncopated riffs, circling each other, sparse and chiming in their aesthetic but frenetic all the same. Percussion is at turns stern and playful, from loose, brash funk strains on “Will To Power” to airtight disco beats on “Natural.” Bass work here, with its own thumping neon flourishes, is not so much an accompaniment but an intricate piece of this web of sounds, as critical and imaginative as the leads it lurks behind. Vocals, typically sung in unison, are sneering and sharp and jagged like the provocations they carry: “Sign on the line/Devalue your time!” they jeer on “Sign On The Line.” Later, on closer “Division,” they lament and reject institutionalized oppressions: “State-endorsed bigotry/Lies from the factory!”

It feels crass to call N0V3L a band—the word feels cumbersome and bloated with traditionalist connotations. N0V3L is a self-sustaining creative collective operating out of a house in Victoria, where they produce their own music, videos, and clothing. These elements converge and convulse to create music that challenges the gluttony and ruin wrought by power, while humming along with kaleidoscopic spontaneity into a tightly-wound audible world that is at once jarring and violently danceable. N0V3L’s debut EP is a call to a burnt-out dance floor, where the dance floor has become a space of dialogue and action and resistance. Please do enjoy.

N0V3L is an engine of entertainment and social criticism weaponizing rhythm and melody against the unsound powers that be. Rigid new-wave, angular funk, polyrhythmic disco and intellectual punk together approximate a radical new sound that forms a principal means of ideological circulation. Drawing influence from such mindful predecessors as DEVO and Public Enemy, N0V3L offers an empowering, socially-charged stance in fierce opposition to aspects of the modern cultural landscape, sounding an urgent call to mindfulness and collaborative resistance.

WHAT YEAR IS IT?

Bandcamp Daily  your guide to the world of Bandcamp